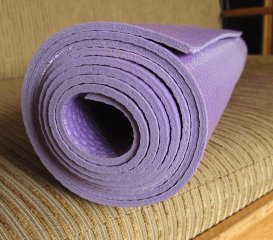 I’m no yogi, though i’ve attended more than a few yoga classes over the years. But i am an engineer (well, a former engineer), with a practical turn of mind and an eye for detail. I like to see things (especially small things) done in the most efficient way. Call it an occupational OCD.

So i’ve always been a little bemused at the way most people roll up their yoga mats after a class: starting at one end with a tight radius and rolling (often down on their knees on the floor) all the way to the other end, in more or less laborious fashion.

Then, when you unroll the mat for the next class, the inside end has that curl to it, which takes a while to relax down.

There’s a better way (in my opinion), both quicker and more elegant. Pick the mat up in the middle, folding it approximately in half.

Square it up, then start rolling from the middle, down to the two free ends. You have only half the length of the mat to roll, so it’s quicker. And you can do it standing up.

When you next unroll the mat, the two ends relax flat quicker because they haven’t been rolled to the small radius at the centre of the roll.

And as a bonus, the inside of the roll now makes a nifty little yin-yang symbol. Enlightenment! 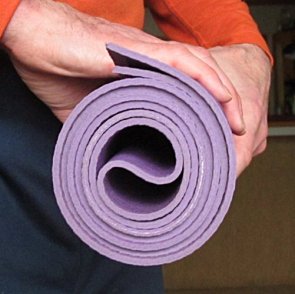 One thought on “A better way to roll”