Here’s a serious piece of leverage against Canada’s stalling and obstructing on climate change (emphases mine). If i were Stephen Harper i’d be in a bit of a sweat right now. Not only do three-quarters of Canada’s population poll as being embarrassed over his stalling on climate action, but this new censure adds potential economic teeth to the consequences of his government’s inaction — something the PM will understand.

So it seems he now will be personally attending the Copenhagen conference — at which both Obama and Chinese leader Hu Jintao will now be present. (I read that Jintao has pledged to cut Chinese carbon intensity almost in half.)

Poor Stephen. Think i’ll give him a call tomorrow to urge him to save his own ass. Not to mention the rest of ours, here on Planet Earth.

Prominent campaigners, politicians and scientists have called for Canada to be suspended from the Commonwealth over its climate change policies.
The coalition’s demand came before this weekend’s Commonwealth heads of government summit in Trinidad and Tobago, at which global warming will top the agenda, and next month’s UN climate conference in Copenhagen. Despite criticism of Canada’s environmental policies, the prime minister, Stephen Harper, is to attend the Copenhagen summit. His spokesman said today: “We will be attending the Copenhagen meeting … a critical mass of world leaders will be attending.”
Canada’s per capita greenhouse gas emissions are among the world’s highest and it will not meet the cut required under the Kyoto protocol: by 2007 its emissions were 34% above its reduction target. It is exploiting its vast tar sands reserves to produce oil, a process said to cause at least three times the emissions of conventional oil extraction.
The coalition claims Canada is contributing to droughts, floods and sea level rises in Commonwealth countries such as Bangladesh, the Maldives and Mozambique. Clare Short, the former international development secretary, said: “Countries that fail to help [tackle global warming] should be suspended from membership, as are those that breach human rights.”

Full article at the excellent Guardian.

Five toga-clad revellers pulled off a coup that stunned even themselves in the Oyster Slurping Contest at last Friday’s Mermaid’s Ball. — the costume-party element of the (in)famous annual Clayoquot Oyster Festival.

Left to right in the pic (which is one of the least scandalous of our slurp posted on Facebook by Ed Henley) are winning team members Kim, Josie, me, Katie and Lyndsey.

For those at the raucous event who did not hear Cameron reading our  explanatory speech (i.e. everybody), here’s the text:

Friends, Tofitians, countrymen … Centuries ago, the ancient Greeks instituted a festival of sport.

YEA, in the very shadow of noble Mount Olympus, home of the GODS, they held a yearly contest of physical prowess FREE of cheesy corporate sponsorship and obscene insider profit at taxpayer expense.

This ancient, shining civilization — the very birthplace of democracy itself — NEVER compromised its citizens’ civil rights as they enjoyed their traditional sports of naked wrestling and WOMEN’S SKI JUMPING.

NOW, in a tribute to their TRUE spirit, we present the long lost opening event to those ancient Games … the OLYMPIC OYSTER RELAY.

And the sign that Josie held up at the end read:

In a lovely touch, it was printed in the Coca-Cola font. We rest our case. 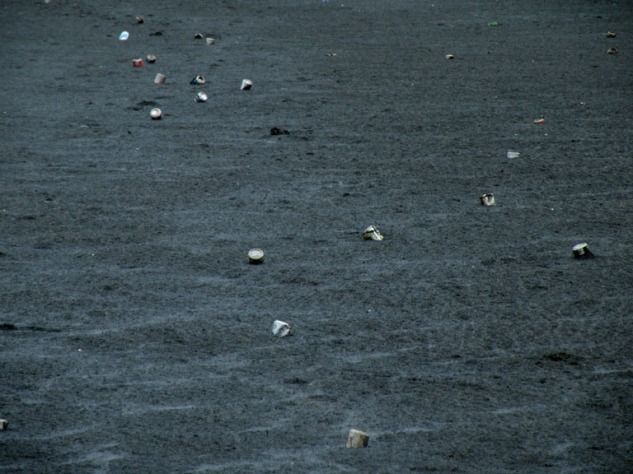 Thanks to local gadabout and civic tornado Jackie Windh and her public-spirited Tofino Residents blog for the heads-up on this gross-looking and undoubtedly insalubrious slick that washed about in Tofino harbour last Thursday — apparently the result of some epic, industrial-style cleaning at a posh waterfront establishment that i will be delighted to name here when it is confirmed. (Click pic to go to her post, with more pics and video.)

Jackie urges concerned residents to ask council to get DFO looking into this, and i concur. If we can’t take even this much responsibility for our immediate surroundings, how can we think ourselves worthy of living in Clayoquot Sound?

Here’s my letter to council:

I am writing to ask that you vigorously look into the source, effects and punitive measures for the shocking discharge of sludge and trash that was dumped into Tofino harbour on Nov. 19.

If we are to take even a modicum of responsibility for our immediate surroundings, this incident cannot be dismissed or let slide. As Tofino’s elected guardians, I see it as your responsibility to invoke some action on this front. Because it happened on the ocean, it seems to me that DFO is the body responsible for looking into it. Please urge them to undertake an investigation.

If we do not — as individuals, as governing bodies, and as a town — bring censure or repercussion to this grossest form of industrial discharge, then anybody can get away with anything and we might as well write off the whole of Clayoquot Sound.

I suspect — I hope — the whole debacle was just a foolish mistake on someone’s part, rather than a deliberate act of irresponsibility. But even accidents have consequences, and it would be well for those responsible to know people are watching, and people care.

I look forward to hearing more about the cause of this egregious abuse.

UPDATE (26 Nov.): It appears i flew off the handle a little, and that the sludge is of natural origin: worm casings. Who’da thunk? That doesn’t explain all the beer cans, but the best biological minds in Tofino are pretty sure. Details at this blog post.

~greg (flying off the handle since … well … birth)

Recently received from the federal Liberal party (info@liberal.ca), in response to my email berating the party for not supporting the NDP’s bill C-311.

I would like to acknowledge receipt of your recent e-mail regarding Bill C-311, An Act to ensure Canada assumes its responsibilities in preventing dangerous climate change.

As this is a Private Member’s Bill it was a free vote for all members of the Liberal Caucus.  Those Liberals who voted for the motion did not vote against Bill C-311, but rather voted for a 30 day extension of hearings at the Environment Committee.  We continue to support Bill C-311 in principle but wish to examine it further in Committee to ensure that Canada actually achieves greenhouse gas (GHG) reductions.  Currently, Bill C-311 only focuses on emissions targets but has no mechanisms to achieve them.

The Liberal Party remains focused on actual ways to reduce GHGs.  That is why we have committed to the largest investment in clean energy Canada has ever seen.  We are also working with ENGO’s, to implement a strong cap-and-trade system with hard caps, with no loopholes, that will actually achieve real reductions.

The Liberal Party is committed to an ambitious result from Copenhagen, unlike the Reform-Conservatives whose sole objective is to sabotage international progress in the fight against climate change.  However, it is clear that no progress will ever be achieved so long as Stephen Harper is Prime Minister.

Thank you for taking the time to write.

Ostensibly about boats and cruising, this wonderful article by Robert Pirsig (Zen and the Art of Motorcycle Maintenance) offers a perhaps even fresher perspective on the most pervasive plague of modern life than when it was originally published in Esquire, May 1977.

Cruising Blues and Their Cure

Their case was typical. After four years of hard labor their ocean-size trimaran was launched in Minneapolis at the head of Mississippi navigation. Six and one half months later they had brought it down the river and across the gulf to Florida to finish up final details. Then at last they were off to sail the Bahamas, the Lesser Antilles and South America.

Only it didn’t work out that way. Within six weeks they were through. The boat was back in Florida up for sale. END_OF_DOCUMENT_TOKEN_TO_BE_REPLACED