Here are a few nuggets from the celebrated Margaret Atwood, who read in Tofino last Saturday from her new dystopic book, Year of the Flood. Still a lively and witty lady, and it was a good West Coast crowd that gathered to see her.

What most impressed me, though, was the co-reading given by her partner Graeme Gibson from his book, The Bedside Book of Beasts. What sounds from the title like a whimsical tour of the animal kingdom (real or imaginary) — and looks, at first blush, like a picture book of animals through the ages — is actually a meaty read, full of surprising thoughts and connections. There’s some deep thinking in it about the human characterizations of animals, and what that says about us. I came away wanting to buy a copy.

From my random, chicken-scratch notes of the evening: 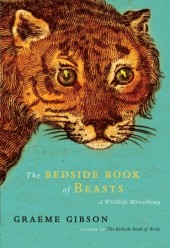 Tree-hugger? Why not a tree-lover?!

Quoting someone: “The whole of Nature is a conjugation of the verb ‘to eat,’ in the active and the passive.”

“Forest bathing” (a.k.a. walking in the woods) … Nature Deficit Disorder…. Some interesting revelations about how time spent in wilderness eases behavioural disorders. People heal faster when they have a scenic view — even just a painting — as opposed to a relentless cityscape.

Humans domesticate any number of other species, but we ourselves are the only evolved domesticate.

Once everything is owned by governments and corporations, there will be no neutral third party left to say “No, you aren’t allowed to do that.”

Do I have hope? Hope is built-in. Back in the paleolithic, if you were too bummed out to get out of bed in the morning to find something to eat, you weren’t around for long. We are evolved to hope.

I want everyone here to make a pledge today. Coffee is the second most traded commodity worldwide, after oil. It has a huge impact. If you’re only going to do one thing, I want you to pledge that you’ll only drink shade-grown, organic, fair trade coffee from now on.

I’m about a third of the way through Year of the Flood. Tain’t timeless lit’ra’chure, but it’s interesting.

While i think of it, this year’s Massey Lectures were delivered by Margaret Atwood, under the stunningly prescient title (given recent events) of Payback — Debt and the Shadow Side of Wealth. As the blurb says, it’s not about practical debt management or high finance. Rather, it is an investigation into the idea of debt as an ancient and central motif in religion, literature, and the structure of human societies.

I caught one lecture live on Ideas but couldn’t work the rest in. However, i now have them all as podcasts. The plan is to get together with a bunch of people, listen to them (one at a time) on subsequent evenings, and discuss. Let me know if you’re interested.

All five lectures can be downloaded as podcasts here, for a limited time, courtesy of the good old CBC — the best thing to happen to media in this benighted country since, well, ever.

Harper’s huge recent cuts to arts programs, along with his remarks about arts being a “niche interest” and “a bunch of rich people at galas whining about their grants,” are a slap in the face to people like me, who devote countless hours to volunteering for the arts and the pursuit of our own artistic endeavours. Harper’s gaffe (as it’s shaping up to be) is a window into the man’s soul, which looks to be a chill and forbidding place to live.

Out of interest i dug up what i could on Harper’s cultural cred. From a Wikipedia article, here’s some background:

Hmm … not a lot of evidence there for artistic savoire faire. But the article does go on to list some serious cultural chops. Harper:

Oh, well, okay then — by that measure he’s clearly qualified to both comment on and control (read: “strangle”) the country’s artistic future. However, let’s give a moment to one of our country’s preeminent artists, dagger-tongued author Maggie Atwood, who in a recent Globe & Mail opinion piece (To be creative is, in fact, Canadian) demurs with Harper’s view. Do read the whole thing, but here are the first few paragraphs:

From Thursday’s Globe and Mail

At present, we are a very creative country. For decades, we’ve been punching above our weight on the world stage — in writing, in popular music and in many other fields. Canada was once a cultural void on the world map, now it’s a force. In addition, the arts are a large segment of our economy: The Conference Board estimates Canada’s cultural sector generated $46-billion, or 3.8 per cent of Canada’s GDP, in 2007. And, according to the Canada Council, in 2003-2004, the sector accounted for an “estimated 600,000 jobs (roughly the same as agriculture, forestry, fishing, mining, oil & gas and utilities combined).”

But we’ve just been sent a signal by Prime Minister Stephen Harper that he gives not a toss for these facts. Tuesday, he told us that some group called “ordinary people” didn’t care about something called “the arts.” His idea of “the arts” is a bunch of rich people gathering at galas whining about their grants. Well, I can count the number of moderately rich writers who live in Canada on the fingers of one hand: I’m one of them, and I’m no Warren Buffett. I don’t whine about my grants because I don’t get any grants. I whine about other grants – grants for young people, that may help them to turn into me, and thus pay to the federal and provincial governments the kinds of taxes I pay, and cover off the salaries of such as Mr. Harper. In fact, less than 10 per cent of writers actually make a living by their writing, however modest that living may be. They have other jobs. But people write, and want to write, and pack into creative writing classes, because they love this activity – not because they think they’ll be millionaires.

Every single one of those people is an “ordinary person.” Mr. Harper’s idea of an ordinary person is that of an envious hater without a scrap of artistic talent or creativity or curiosity, and no appreciation for anything that’s attractive or beautiful. My idea of an ordinary person is quite different. Human beings are creative by nature. For millenniums we have been putting our creativity into our cultures – cultures with unique languages, architecture, religious ceremonies, dances, music, furnishings, textiles, clothing and special cuisines. “Ordinary people” pack into the cheap seats at concerts and fill theatres where operas are brought to them live. The total attendance for “the arts” in Canada in fact exceeds that for sports events. “The arts” are not a “niche interest.” They are part of being human.