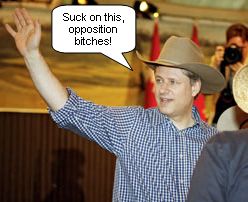 I caught this CBC story this morning, which begins with the lead:

The Conservatives are poised to eliminate the public subsidies that Canada’s five major political parties receive, a move that would save $30 million a year but could cripple the opposition.

The story, posted last night at 11 p.m., has already garnered some 850 comments, mostly from outraged members of the 66% “minority” who didn’t vote Conservative in the last election (which cost $300 million, in case you’re counting pennies).

Here’s the letter i just dashed off to my esteemed MP James Lunney (nanaimo@jameslunneymp.ca) and cc’d to my doubly esteemed Prime Minister, Stephen Harper (pm@pm.gc.ca):

Dear Mr. Lunney,
Your party’s imminent move to cut taxpayer subsidies to political parties is a deeply cynical political move and a blow against democracy in Canada. The $30 million saved will not make a difference in a recession measured in ten and hundreds of billions, but it will have a strong negative effect on the opposition parties that represented, what, 66% of the country’s voters in the last election. An election that was called somewhat frivolously, I might add, at a cost of $300 million.

Your party’s role as government of the day is to lead, not to use every method at its disposal to cripple the opposition.

Please rethink this sad political ploy and get busy with meaningful work.

Poster to my own gregblee.ca blog, the Clayoquot Writers blog, and others. View all posts by greg blee

One thought on “My letter to Steve”