So after weeks of putzing and procrastination (or maybe just waiting on cosmic alignment) departure folds together in hours, like some clever kid’s toy.

Riding shotgun in Henry’s big black truck. Henry’s a talker, fortunately, so I can listen and not abuse my sore throat too much. I suck on cough drops like they are candy. (Yes, I know, they are.) The internal barometer is reading “indeterminate” — like it would be so poetically correct if I were to feel better with every passing mile, but so repulsively cliched too.

On the ferry, I sit at the back when the boat pulls away, thinking it’ll turn around and I’ll be at the front. But it’s the double-ended kind that doesn’t turn, so for a while I watch Vancouver Island, my home for the past ten years, slowly recede over the shiny-grey water. I do decide I’m feeling incrementally better, though. And reminding myself I won’t be going back for two whole months — or ever, maybe. 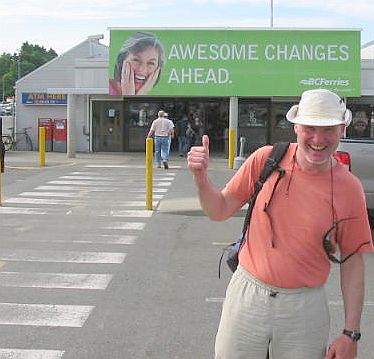 There are indications I’m out in the wide world. Two women behind me, one saying, “What is it with men and sunscreen? They never want to buy it, never remember to put it on.” Her companion says, “More men get melanomas than women.” Not a likely conversation on the west coast.

Later, in a different seat (this time at the real front), I’m reading photocopied excerpts from a book called The Religion of Technology (1998), in which author David Noble makes the case that, far from being diametrically opposed, our current technological fervour actually has its roots deep in religious feeling. In a nutshell, we are engaged in the project of returning ourselves to our state of perfection before the fall from grace. I’m sitting at the portside end of a long row of empty seats, and at the starboard end of the row a guy sits reading Wired magazine — pretty much the New, Improved Testament of tech boosterism.

To my left, on the outer deck, a man in a “wifebeater” undershirt and boxing gloves hammers one of the steel pillars. I take a clandestine picture, thinking, “I’m not in Kansas anymore, am I?”

Coming into Horseshoe Bay, the ferry stops engines not once but twice, giving the five-blast auditory finger to two motorboats that irresponsibly cross our bow. Welcome to traffic.